There is a famous statue in France, the “Bullecourt Digger”

An Australian digger looks out to the fields near Bullecourt where over 10,000 Australians were slain during two battles in April and May 1917. 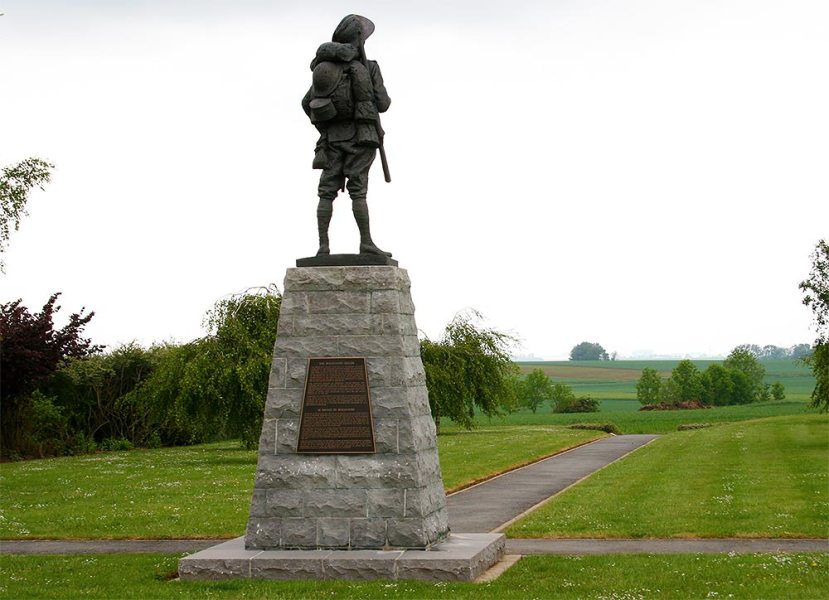 The bronze ‘Bullecourt Digger’ stands in the Australian Memorial Park just outside Bullecourt, along the Rue des Australiens and along the side road to Reincourt–les–Cagnicourt.

This is the second in our series profiling ANZACS from Wamberal who served our country and whose name is listed on one of the Rolls of Honour in the Wamberal Memorial Hall.

Albert Henry Bean was a popular, dark and well built 18 y/o with blue eyes and a bright future.

He had moved to Wamberal from his childhood home in Henderson Road, Station Hill, Queanbeyan that he shared with his dad, two brothers and two sisters. His mum had died in 1911 and his dad remarried in 1912.

Bert worked for Forbes and Mary Campbell on their market garden near the intersection of today’s Cabarita Street and The Entrance Road.  Forbes and Mary were Bert’s guardians and to enlist for WW1, anyone under the age of 21 required the permission of a parent or guardian to enlist.

Nevertheless, on Monday March 6, 1916, Bert caught a train to the Sydney Recruiting Depot at the Royal Agricultural Show Ground. Bert enlisted by simply recorded his age as 21 years and one month when he we was actually only 18 years old.

The neat, cursive writing on his enlistment papers and will, reveal a man with excellent writing skills, an indication of having been a good student with a strong attention to detail.

Though no diary or other personal effects remains, it is likely that he moved to Wamberal in the hope of earning enough to buy his own farm in the area.

Life in the 13th Battalion

As Private No 5986 in the 13th Battalion, 19th Reinforcement, Bert completed preliminary training at Kiama and whilst there he made a will appointing his employer, Forbes Campbell of Wamberal as the executor of his estate.

And in a sign of his deep connection with the Campbell family, Bert left all his  property to his “dear young friend, Miss Molly Campbell“, the four year old daughter of Forbes and Mary Campbell.

I GIVE and BEQUEATH all my real and personal property estate and effects of whatsoever kind and wheresoever situated unto my dear young friend Miss Molly Campbell, the daughter of Mr and Mrs F.S. Campbell of Wamberal near Gosford, absolutely. Albert Bean

Albert received further training at Salisbury Plains in England, where it is recorded that he contracted influenza and mumps and spent 20 days in hospital .

He sailed to France from Folkestone on the S.S. Princess Victoria on 8 February 1917. After arriving in France, he would have received further training in the use of the Lewis machine gun before heading to the front line.

Life on the western front

Bert’s 13th Battalion was rapidly earning respect for it valour and courage. In February 1917, the 13th Battalion attacked Gueudecourt and Captain W. H. Murray, earned the Victoria Cross for his actions. He was to become one of the most highly decorated officers in the AIF.

Bert Bean in the First Battle of Bullecourt

The Germans had heavily fortified and strongly defended the small village of Bullecourt in northern France.

By contrast, the British commanders had not properly planned the attack, relying on primitive and unproven tanks instead of artillery to support the attacking Australian infantry.

At 4:30 am on Wednesday 11 April 1917, the tanks were to be ready to advance and the Australians ordered to advance 15 minutes after the tanks had started, regardless of the tanks progress.

So at 4:45 am, the whistle blew and Albert “went over the top” carrying his Lewis machine gun along with his friend Private Albert Richardson.  But the tanks were a complete failure and offered no support: only four of the 11 tanks arrived on time they were too slow and soon hit by artillery or broke down leaving the Australian diggers exposed and vulnerable.

Nevertheless, the Australians managed to break into the German defences but received no support. Due to uncertainty as to how far they had advanced, supporting artillery fire was withheld, and eventually the Australians were hemmed in and forced to retreat or surrender. There were over 3,300 casualties plus 1,170 Australians taken prisoner when they were cut off behind enemy lines.

‘Bullecourt, more than any other battle, shook the confidence of Australian soldiers in the capacity of the British command; the errors, especially on April 10th and 11th, were obvious to almost everyone’. Charles Bean, Official Historian.

Less than a month later, the Australians were ordered to attack the same ground at Bullecourt again, resulting in a further 7,000 Australian casualties. The losses were so great that the AIF never fully recovered and the need to replace them resulted in yet another divisive and unsuccessful attempt to introduce conscription.

Bert was wounded about quarter of an hour after going over top. He tried to return for medical aid but it appears he was killed in the attempt and in the chaos of battle, his body was lost. The military record shows his status was changed from “Wounded” to “Missing” on Saturday 14 April 1917.

On 8 October 1917, a Court of Enquiry found that Private Albert Henry Bean had been killed in action but no remains could be found.

Firstly, Private D.F. McEvoy recorded a statement on the HMAT Orita in September 1919. He described Bert as “…my pal.”

Secondly, Private Albert Richardson recorded his statement at Victoria Barracks in Sydney on 28 April 1919. Richardson said they were both in A company, 4th Platoon on the same Lewis gun. After being wounded, Bert went to seek medical attention but was never seen again.

Bert’s remains were eventually discovered and reinterred in the Queant Road Cemetery (Plot VI, Row A, Grave No. 27), Buissy, France.

On 6 August 1920, his Identity Disc arrived in Australia on the HMAT Boonah and in 1921, Bert’s medals were sent to his dad who had moved to Uriarra Road Queanbeyan. In April 1931, his dad received a photograph of the grave.

Mary  Campbell placed a notice in the Gosford Times of July 26, 1917 recording that Private Bert Bean of Wamberal had been killed in action in France on 11th April, 1917. She wrote movingly that he died for —

The cause that needs assistance,
The wrongs that need resistance,
And the good that he might do.

His friends, Winnie and Nellie Redgate also posted a notice in the Gosford Times on 18 April 1918.

In loving memory of our dear friend Private A.H. Bean (Bert), killed in action France 11th April 1917.
Some day, some time, our eyes shall see, The face that lives in memory.

The Honour Roll in the Wamberal Memorial Hall

Bert’s name is listed on Commemorative Area at the Australian War Memorial (as indicated by the poppy on the plan).

Roll of Honour name projection at the Australian War Memorial

Albert Henry Bean’s name will be projected onto the exterior of the Hall of Memory  at the Australian War Memorial on:

Have your say on the fate of Wamberal Memorial Hall

Prior to being sacked, the a majority of Councillors from Gosford City Council voted to sell the historically important Wamberal Memorial Hall.

Built by the community in 1920 on privately donated land and dedicated to the memory of those who served and lost their lives fighting for Australia, it remains a living and practical memorial to all who served with many descendants still living in the area.

Importantly, it is this last original memorial in the area.

Almost every resident in Wamberal in the past 100 years has had some connection with the hall and park through weddings, dances, theatre, music and social clubs. It has also been a polling place for every local, State and Federal election since 1922.

Since the formation of the new Central Coast Council, the fate of Wamberal Memorial Hall remains unknown but you can have your say using our online survey.